The Giga Press is the largest die casting machine in the world to date. It can weigh up to 430 tonnes and have a clamping force of up to 61,000 KN. Additionally, these gigantic die casting machines are as big as a house and capable of casting extremely large components.

Currently, IDRA and LK Group are the only ones making these machines. And Tesla happens to be the first company ever to order the Giga Press. Since then, people associated with the die casting industry are eager to see the ‘world’s largest die casting machine’ in action.

The name ‘Giga Press’ was first coined by Riccardo Ferrario, the IDRA Group’s general manager. The IDRA group introduced the Giga Press in late 2018. It has been in their catalog since then. It was only until late 2020 that Tesla had started using a customized OL 6100 CS Giga Press for production.

However, IDRA had already announced on their website that they had got the first order for a 5,500-tonne High Pressure Die Casting (HPDC) machine. In 2019, Jerome Guillen, the President of Automotive at Tesla, also stated that they are working on a “giant, giant, giant machine” to “make full-size cars in the same way that toy cars are made.” 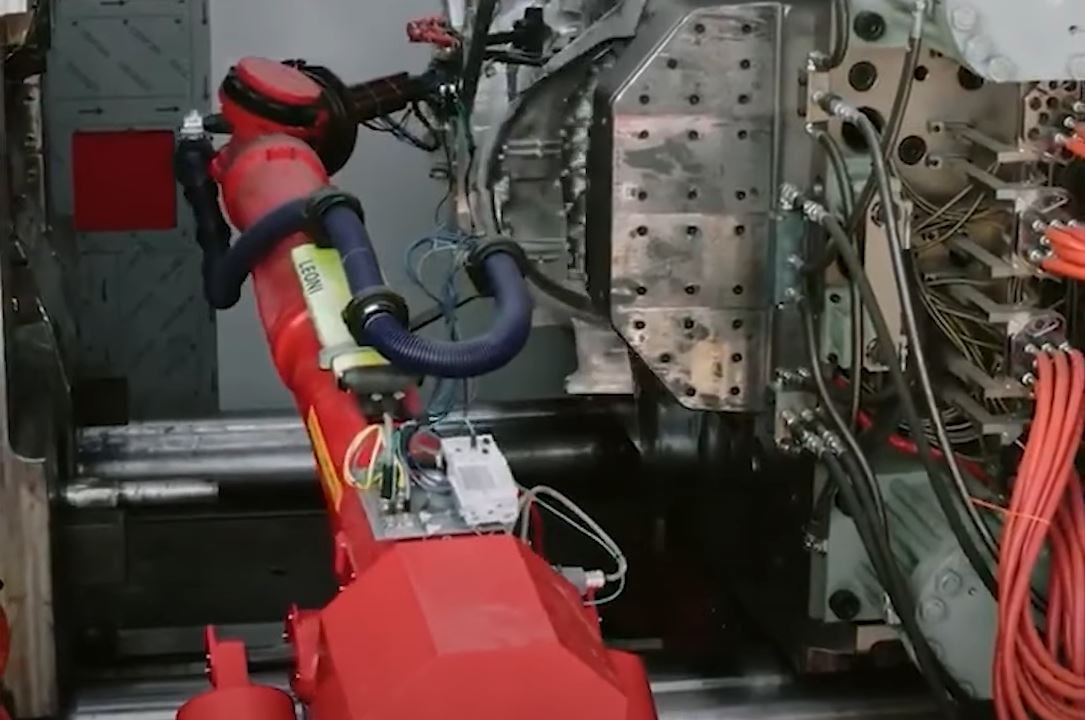 Later on, in April 2020, Elon Musk mentioned that Tesla had bought two huge die casting machines to manufacture chassis parts for the Tesla Model Y. In August 2020, he made a tweet claiming it to be the “Biggest casting machine ever made.”

In January 2021, Elon Musk also announced that the rear chassis of the Tesla Cybertruck will be cast using a Giga Press with over 8,000-tonne clamping force. Moreover, Tesla has successfully installed three Giga Press in Shanghai and two Giga Press at the Fremont factory.

We are optimistic that more companies will utilize the Giga Press technology in the future to boost their production efficiency.

It is the core of the whole setup or the die casting mechanism. It has a similar construction to any regular high-pressure die casting equipment and functions like one, except that it is enormous in size.

The Giga Press uses a 4,000-liter tank for creating a vacuum inside the mold. It is made by Fondarex, A Swiss company that first invented the vacuum technology for High-Pressure Die Casting.

The quenching tank rapidly decreases the temperature of casting to a desirable limit. It is allowing one to achieve some specific properties for a metal casting.

There are mechanical trimming press and laser trim for rapidly cutting of excess metal attached to the casting.

There is a recycling system to utilize the scrap metals. The scrap aluminum is shredded, and offcuts are utilized for the next casting cycles.

Here is a video showing the construction of the Giga Press at the Tesla factory:

There are several Giga Press models with varying sizes and capacities. We will be discussing the technical specifications of the Giga Press Model OL 5500 CS and OL 6200 CS made by IDRA.

Here is a figure showing the platen dimensions of the Giga Presses: 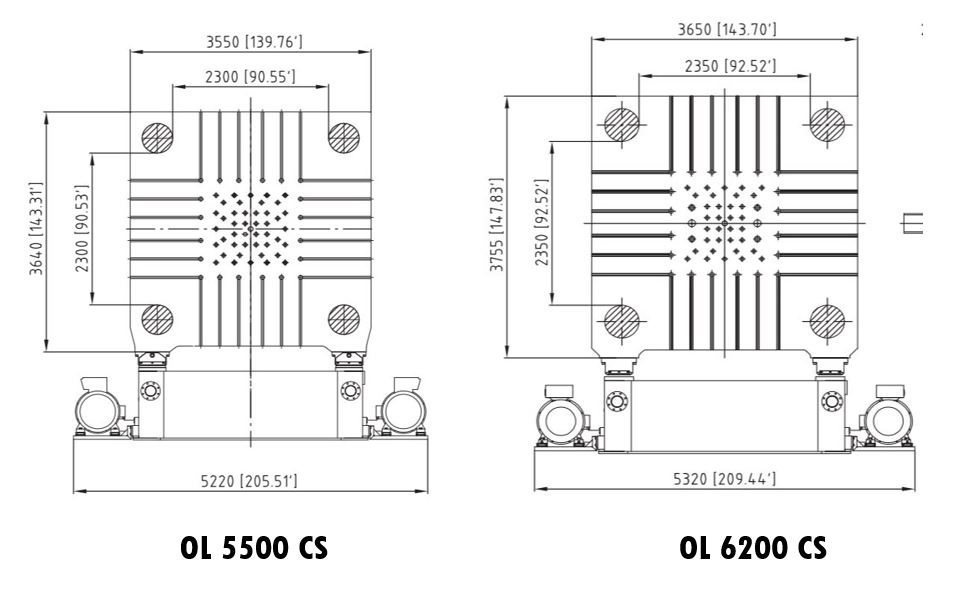 Here is a figure showing the machine dimensions of the Giga Presses: 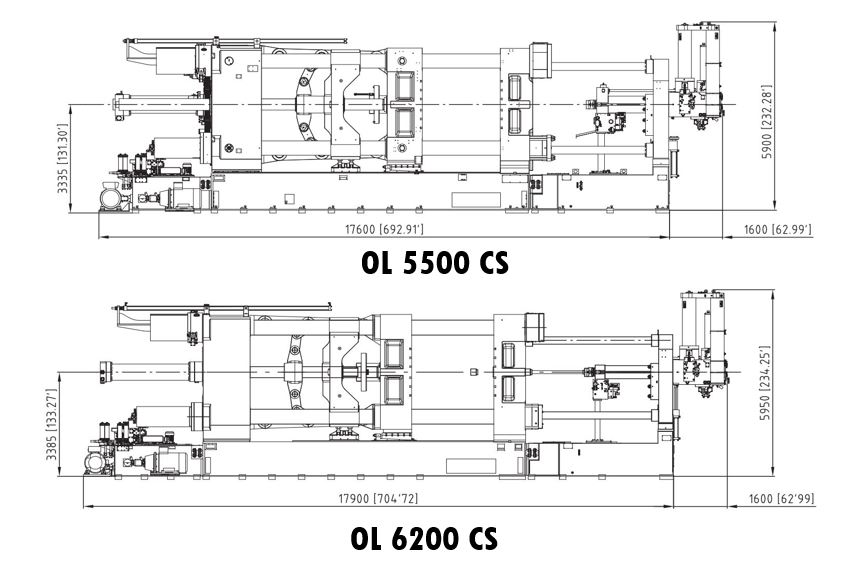 We have provided a comparative chart of the important technical specification of both models below:

The working principle of the Giga Press can be divided into the following steps:

First of all, we have to melt the aluminum ingots and cutoffs from the previous casting cycle in an oven at 850 °C temperature. Then, remove any impurities from the surface, and convey the liquid metal into another enclosed oven using heated pipes. That oven maintains about 750 to 850 °C temperature.

Fill empty space inside the storage oven with nitrogen gas prevents the formation of oxides in the molten aluminum. It also helps to maintain an even temperature. Additionally, operators use Argon gas, Rotary de-gasser, and a Silicon carbide filter to further remove impurities.

Before commencing each cycle, lubricate the die surfaces. A robot sprays about 35 milliliters of Soybean oil in a thin layer to enable easier separation of the casting. Then, the vacuum system creates about 50 millibars of vacuum pressure inside the mold cavity. 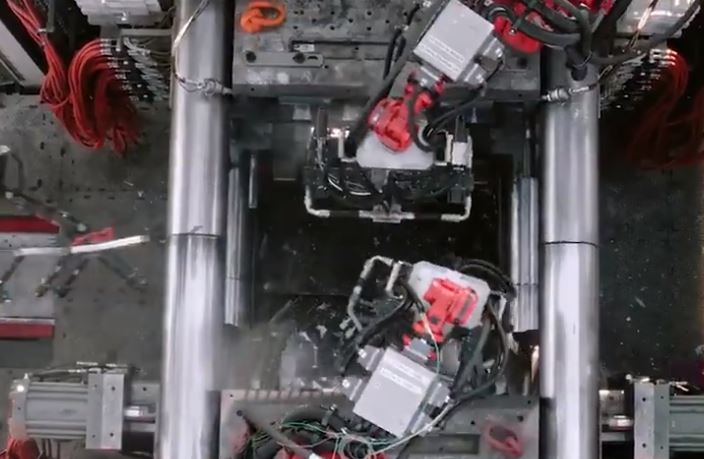 The molten aluminum is transported from the holding oven to the shot chamber of the Giga Press. There the molten metal is forced inside the cavity using a high-speed plunger. The plunger is also lubricated using 8 milliliters of oil before each shot.

Once injected, the casting is left inside until it solidifies. Then, the casting is ejected from the dies at 400°C. The raw casting is then placed in a quenching tank to reduce the temperature from 400 to 50°C rapidly. It helps tackle some defects and increase some material properties.

Cool the open die to 185°C and thoroughly clean it with robots to prepare it for the next cycle. The next casting cycle will begin 1-2 minutes after the current one finishes.

Now, cut each of the raw castings into approximate dimensions using a mechanical trim press. The scrap aluminum is recycled with a scrap metal shredder and added back to the oven. Then, the main casting is checked with an X-Ray to examine whether it has any internal defects.

The verified casting is further perfected using a laser trim and drilled using a CNC machine for fittings. Finally, check the finished casting’s accuracy with a Coordinate Measuring Machine.

Currently, the only sites to have installed or planning to install the Giga Press are the Tesla Factory located at Fremont and three Gigafactory located in Shanghai, Berlin, and Texas. We have discussed those locations in detail below. 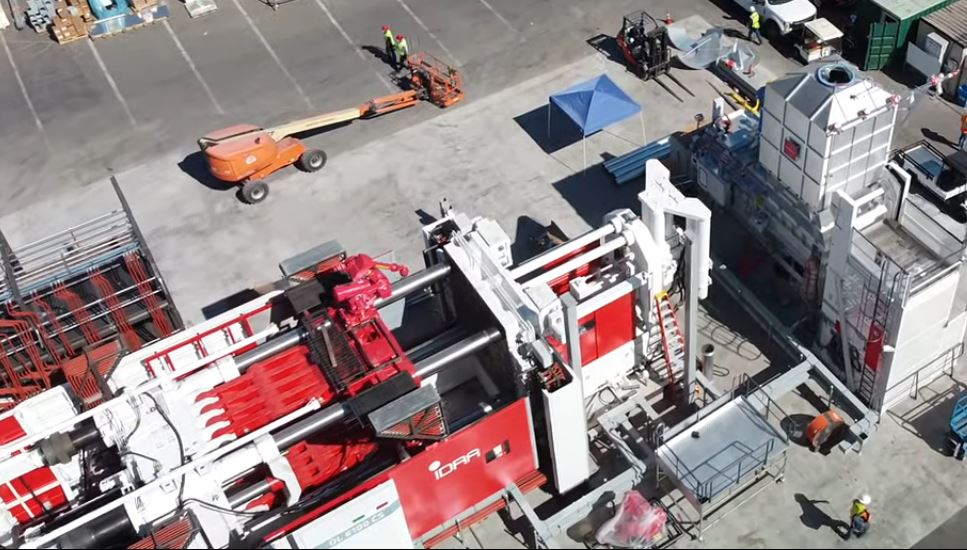 The first two Giga Presses were installed in Tesla’s Fremont factory. The preparation work for installing the first aluminum die casting machine, referred to as the DCM1, commenced as early as May 2020. Tesla had acquired several permits from the City of Fremont to build the necessary housing facilities for the DCM1.

The construction work of the DCM1 facility was pretty much complete by August 2020. In September 2020, Tesla started trials for casting the Model Y’s rear chassis in a single piece using the first Giga Press. By that time, the DCM2 facility was also completed.

The Giga Presses in Fremont were going strong. But an incident raised the alarms on 11 March 2020, when one of the Giga Press caught fire during the operation. 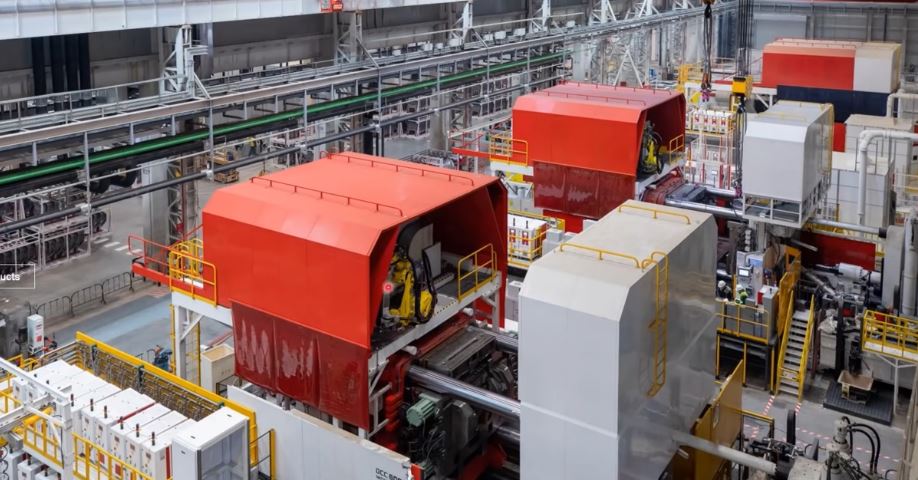 Tesla Installed three more Giga Presses in its Shanghai factory, also known as the Giga Shanghai or GigaFactory 3. The preparation work started at the end of 2019 and finished by October 2020. LK Machinery produced the Giga Presses at Giga Shanghai. And they named it as Impress-Plus DCC6000.

Tesla started preparation work for housing eight 6100 tonne Giga Presses at Giga Berlin (GigaFactory 4). The pilling work for the Giga Presses started in July 2020, which was quite complete by 2021. Tesla was planning to deliver two Giga Presses there by the start of 2021.

The Giga Berlin die casting machines will focus on the production of European Model Y cars. They will have some variations comparing to the others and operator cast both front and rear chassis for the Model Y by using them. 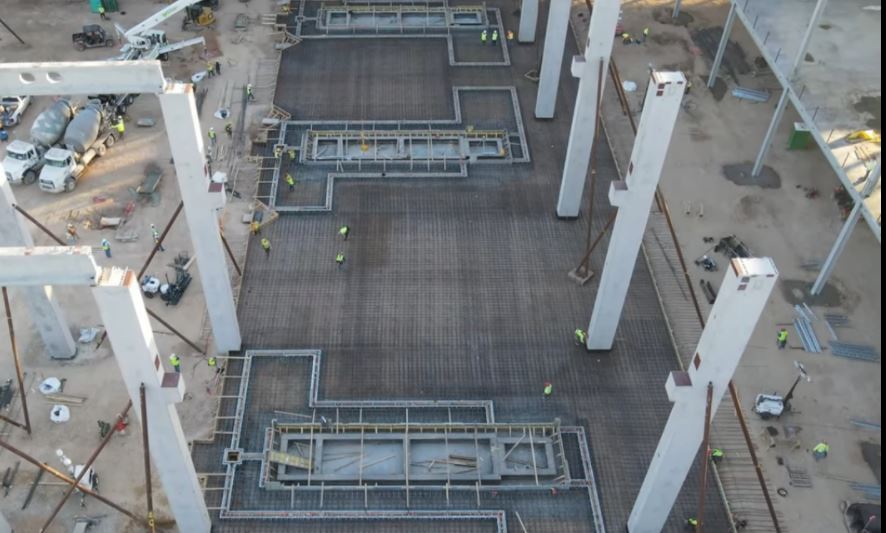 The construction of Giga Texas (GigaFactory 5) is still underway. However, the foundation for three Giga Press became apparent by January 2021. Most of the major components for Giga Press are reported to have arrived at the site by February. Hopefully, the rest of the machines will be assembled soon and ready for production.

What are the Advantages of the Giga Press?

We are hoping for new possibilities with the Giga Press technology taking shape. While still not fully implemented, we can already perceive the potential this technology can offer. Below we have discussed some advantages of the Giga Press.

The Giga Press will greatly improve the production efficiency of large and complex products. The Giga Press will allow manufacturers to cast large a single component as opposed to numerous smaller parts. Therefore, it will virtually eliminate the assembly operations involved.

Thus, there will be great savings in time, labor, and eventually the cost of production. Casting a larger single piece will allow the manufacturer to produce a lightweight structure and impart additional strength to the casting.

Casting a single component would also eliminate the possibility of having alignment issues of parts while assembling. So, it will simplify quality control and allow manufacturers to provide high-quality castings.

Moreover, it will minimize the need for robots in production and significantly reduce the body shop’s size. So, there will be savings in land use as well.

What are the Current Applications of the Giga Press?

Currently, the major field of application of the Giga Press seems to be automotive castings. Automobiles have complex structures and built using numerous smaller parts. Trimming down the number to a few castings would surprisingly boost production efficiency.

Tesla is working on casting the rear body structure of the Model Y using the Giga Press. It will replace 70 pieces of castings into a single piece. They are planning to cast the front chassis component using the Giga press as well. It definitely changes our view on the current production techniques.

Since this is a relatively new technology, it may take some time before seeing more applications of this technology. We are optimistic to see more innovative use of the Giga Press in other industries as well.

What are the Challenges in the Production of Megacastings?

The concept of mega casting is sure interesting. But the sustainability of the technique is still questionable to many. Since this is a new technology, there is still a lot of research people need to do on the Giga Press’s efficiency, cost, stability, and reliability. 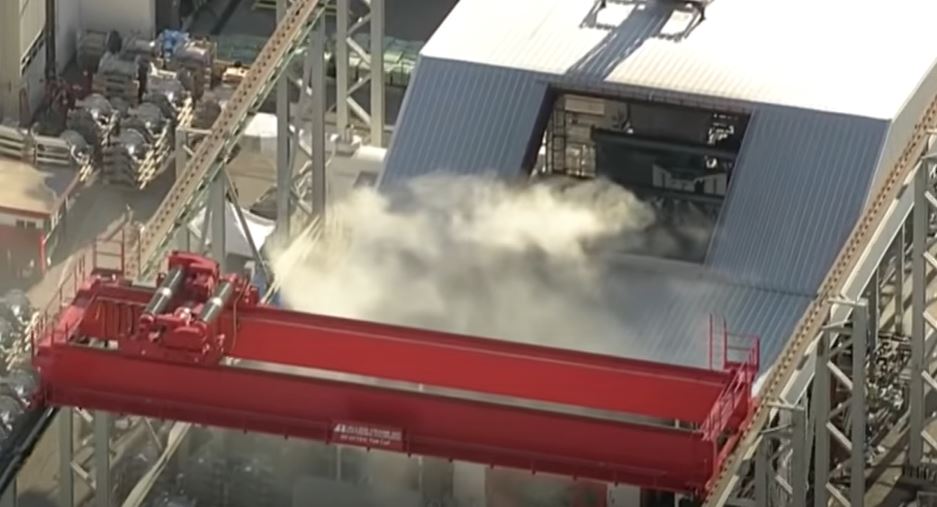 The industry has always been skeptical when it comes to embracing a new concept. So, it might take some time for other manufacturers to follow the mega casting trend. So far, the information we could get from Tesla is limit.

Tesla has been successfully producing trial runs of the Model Y rear chassis. Although, it is certain that it required them numerous iterations to get there. But, the design process for mega casting should become easier as manufacturers gain more insight into the technology.

However, we need to be extra careful when handling such a large quantity of aluminum at once. Recently, a Giga Press at Tesla’s Fremont factory caught fire during production.

The Fremont Fire Department stated that the cause of the fire was molten aluminum and hydraulic fluid. But, it was nothing serious, and nobody would get hurt.

As you can see, there are some potential risks to consider with mega casting. However, we believe that we will overcome the issues involved as the technology develops further.

Is There Any Disadvantage of Integrating Multiple Parts in a Single Casting?

As far as efficiency and economy are concerned, creating a larger casting should be preferable in most cases. But, the idea of pros and cons may differ considering the application and certain scenarios.

For instance, there are obvious benefits of casting larger single components for automobiles. However, repair and maintenance of a car prior to an accident may become very difficult. You surely wouldn’t want to replace the whole front or rear chassis due to minor damage.

So, the auto manufacturers interested in Giga Press might have to find a solution to issues like this before they decide to go for the Giga Press.