Semi-solid die casting commonly known as semi-solid metal (SSM) casting is a recent technique that combines solid metal forging and liquid casting. The process is known for creating metal products with brilliant mechanical properties and near-net shapes. Semi-solid casting is especially suitable for casting certain non-ferrous metals such as copper, magnesium, and aluminum. With its semi-solid behavior, this process allows lower porosity and the formation of holes during shaping.

In the semi-solid die casting process, instead of using completely molten metal, semi-solid casting material is used which is 50% solid and 50% liquid. The metal is melted at a temperature that keeps the slurry in its semi vicious state. The optimum temperature is up to 10 degrees C at which the metal maintains its 30%-60% solid form.

Increasing the solid content of the metal slurry can raise the viscosity by 40%, which impacts the semi-solid die casting process. The metal is cooled which breaks down any dendrites present, improving the ductileness of the metal. Dendrites are tree-shaped structures of crystals formed in the metal as it freezes. After which a suitable semi-solid technique is applied for the die casting, based on which alloy is being used. 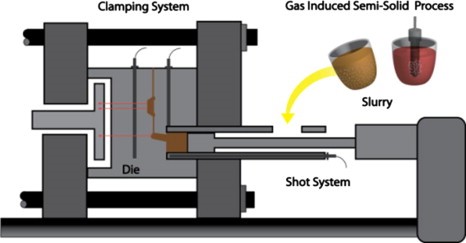 It is one of the oldest techniques used for semi solid casting and manufacturers all around the world still use thixocasting to produce high-value metal parts. With its numerous advantages, thixocasting is commercially used casting technique for aluminum alloys. As a chief SSM method, thixocasting offers the production of alloys into near net-shaped parts with enhanced aesthetics and strength. Once the metal has been prepared in semi solid form for casting, there are further three stages in thixocasting.

First of all, machines produce pre-cast billet with unique spherical globular microstructure. The billet is made by stirring the molten metal and removing air bubbles from it. Secondly, the billets are reheated at a temperature that maintains their partial molten form. In the last stage, the alloy is cast by pressing the billets into the die cavity.

The thixocasting process, however widely used, cannot produce superior final products if certain requirements are not met appropriately. Manufacturers have to spend extra than standard casting to produce special billets used in this process. But the premium rates result in good surface finish and outstanding metallic properties of the finished products.

The rheocasting process begins with the semi-solid slurry, which is obtained directly from the molten metal formed in the traditional die casting furnace, instead of reheating the billets. Rheocasting utilizes the partially solid slurry by the addition of aluminum chips to the substrate. In some cases, it is done by swirling the metal mixture at specialized rates. The alloy is then cooled and injected into the die without any transitional solidification step, and the casting is done.

After the metal casting, the manufacturer can utilize the leftover slurry by turning it into molten form again. It can be achieved by putting the excess slurry in a die casting machine or furnace. The components made directly from the semi-solid casting slurries are distinctly outstanding.

The characteristics of rheocasting include better energy management, lower shrinkage, and greater production efficiency. The most significant advantages of rheocasting are the less expensive feedstock, reduced latent heat, and direct recycling.

Thixomolding is the method most commonly used for magnesium alloys. In this method, a metal slurry is produced by the manufacturer using chips. The chips are put into a heated barrel at a specific volume and under precise conditions. The casting machines automatically force the slurry into the die cavity. Thixomolding allows the magnesium alloy to be converted into a semi-solid slurry. It shapes casting products with greater accuracy and minimum defects.

Compared to regular die casting, thixomolding has multiple advantages. The most noticeable one is the safer casting operation, due to the absence of the melting furnace. With no melting pot, the chances of hazardous gases are minor; hence, there are no damaging impacts on the environment.

For injection thixomolding, the energy consumption per metal part is less than that of high-pressure die casting, and the microstructure offers better control. But the thixomolding injection machines are expensive to set up and complex to operate. They require intensive maintenance because their parts come in direct contact with molten metals, especially magnesium.

SIMA serves as a modification of the thixomolding process, as it is inexpensive and comparatively easier to carry out. These properties make SIMA, suitable for mass production at industrial levels. Metal is heated and molten at a designed temperature, then put under a highly controlled setting. The controlled environment produces crystallization with suitable internal grain structures, upon cooling. Non-dendritic feedstock can be obtained easily in SIMA by heating the strained feedstock to a partially solid state.

The feedstock is a hot substance that has been worked upon, for instance, extruded, rolled, or forged in the solid-state, under recrystallization temperature. That feedstock turns into a fine globular structure after heated into the semi-solid form. In some cases, the manufacturers roll the material at an even temperature to make small components with great qualities.

Semi-solid die casting can be applied for most non-ferrous alloys, out of which copper, magnesium, and aluminum are the most common ones. Evidently, for semi-solid aluminum die casting, the preferable methods are thixocasting rheocasting.

Other techniques like stress-induced melt activation (SIMA) and RAP can also be used for casting aluminum alloys, regardless of their commercial use. Aluminum alloys are generally used in semi-solid casting because aluminum alloys after casting have better porosity and tensile properties.

Thixomolding is the most known method when it comes to magnesium alloys. In that method, they are the materials of interest because of their extraordinary machinability, low cost, and strength ratio. Compared to aluminum or steel alloys, magnesium has a lesser specific gravity, making it fitter for thixomolding.

Copper is relatively less widespread as a semi-solid die casting alloy, although it is one of the famous non-ferrous alloys. In conventional die casting, the copper alloy has been used at commercial levels, with advanced technologies.

The productivity of the casting process is enhanced as the cycle time is reduced in semi-solid casting. In semi-solid die casting, the manufacturer can use a die for a longer period. Also, the semi-solid metal castings have high quality due to stronger tolerance, lesser porosity, and low shrinkage during solidification.

The vicious partially solid alloys in the semi-solid casting, due to their thixotropic property flow only when acted upon by force. Which is the reason, they do not drift to the lower cavities of the die.

In the rheocasting technique of semi-solid die casting, alloy casting can be achieved without any splashing, entrapment of air, and oxide formation. The reheating and injection of the billets into the die cavity make very fine, strong, and uniform internal structures.

Semi-solid die casting offers many economic and commercial attractions for the manufacturers. Casting firms can produce large amounts of metal parts with automated production procedures in a short time.

The waste and by-products produced in the semi-solid die casting are in lower amounts than other casting methods. Semi-solid casing methods relieve companies from the costs related to environmental site de-contamination and lead-based waste management.

In this century, semi-solid die casting has numerous applications due to its cost efficiency and excellent products. This casting process is used all around the world by several industries:

Casting creators prefer semi-solid castings for medical and aerospace parts, because of the better metallic properties of the casting parts.